Black pepper (Piper nigrum) are the fruits of a flowering vine from the Piperaceae family. It is one of the most commonly used culinary spice in the world. Black pepper originates in India and is native to Kerala. The main spiciness of black pepper comes from a chemical called piperine whereas traditional peppers, contains capsaicin.

Peppers have been used in Ayurvedic medicine for the treatment of various ailments and discomforts. Recent research work has given support for many of these uses and has uncovered the probable mechanisms responsible for their Action

Piperine has the ability to enhance the bioavailability of Vitamins, Minerals and in Health Dietary Supplements. There are many studies conducted and many on-going to understand the mechanism, as piperine is known to inhibit the enzymes P-glycoprotein and CYP3A4 in humans. These enzymes are manly involved in the metabolism and transportation of various metabolites. Many animal studies have also shown that piperine inhibits CYP 450 enzymes whicht metabolize many of the drugs. Studies suggests that piperine may increase the bioavailability of curcumin by a factor of 20, similarly there many studies going on various supplements and vitamins and antioxidants like Ubiqinol.

Piperine has shown to increase the production of adrenalin and other catechol-amines, which can make it useful for managing temporary stress. This application of piperine is mostly combined with buffered vitamin C.

Piperine has shown to have thermogenic properties which increases the body’s basal metabolic rate. And this property may be useful in helping us to maintain a healthy optimum weight.

Piperine prevented the formation of ulcers in rats and mice. It was effective against ulcers caused by stress, hydrochloric acid, and the pain reliever indomethacin.

Further clinical studies and investigations are required to establish these lab findings for benefits of individuals.

Let’s try to understand about the piperine mechanism of action inside the body. 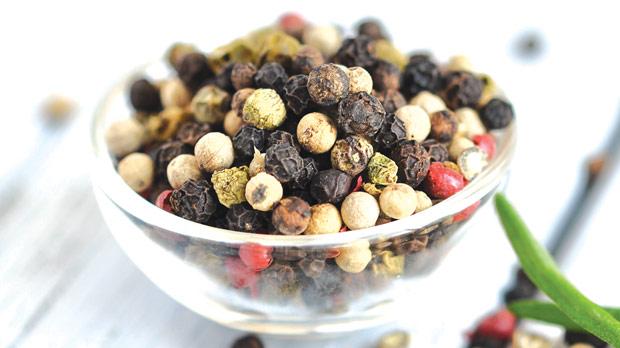 How our body is controlling access to their cells

Our body has many major mechanisms for directing the exposures of their cells for nutritional and other food and chemicals substances. Mainly 4 of the mechanisms are of interest in relation to piperine namely metabolic digestion, regulated absorption, regulated exclusion, and solubiliser attachment.

How piperine works in increasing the bioavailability of many Ingredients

As we have looked into the 4 major mechanism of body making nutrients available for absorption till excretion and solubilizing. Piperine has shown remarkable abilities to manipulate all of four of these mechanisms. It can inhibit many number of enzymes responsible for metabolizing nutritional substances and drugs, it stimulates and activates the activity of amino acid transporters in intestinal lining, it prohibits p-glycoprotein, the pump proteins, which removes substances from cells, and it also decreases the intestinal generation of glucuronic acid, thus by permitting higher percentage of the substances to enter our body in active forms. Thus consequently, some of these active substances are able to reach, enter, and retain within the targeted cells for longer duration of time than otherwise the case be. Somewhat, this can be an added blessing, if we are using a drug for which the therapeutic level is not substantially lower than the toxic levels, piperine supplement ingestion may increase the bioavailability of the drugs until its intra-cellular levels exceeds the toxic thresholds. Thus piperine supplementation may be beneficial many a times in making a marginally effective therapeutic substance into a highly effective one, simply by increasing its bioavailability and intra-cellular staying time.

Since piperine’s most important effect is to prohibit the metabolic enzymes that may otherwise deactivate many substances, it also has the capability to induce the body’s production of certain of these enzymes. The wholesome effect in some cases would be to increase, rather than decrease, the rate at which many substances can get metabolized in our body, thereby decreasing their bioavailability.

Whereas, in cases where the metabolization of a substance converts it into a more active form for example, a prodrug which gets converted into an active form inside the body. Piperine may enhance the bioavailability of the original substance by decreasing its conversion rate to its metabolite and thus decreases the amount of the active metabolites. In effect, piperine will be reducing the availability of the desired substance.

Thereby the activities of piperine are complex and may not always be predicted. Piperine users whose drug and/or supplement daily regimen employs numerous or unusual substances should be watchful for undesired side effects may be resulting from piperine’s alteration of the bioavailability of these other substances. Presumably most such side effects may be eliminated by correctly adjusting the dosages.

We must simply also rely on the fact that piperine has been consumed for thousands of years as a component of black pepper, apparently without causing any significant problems.

Some Categories of substances where Biovailabilities affected by piperine

As indicated above, it is not possible to exactly predict on theoretical grounds the effects piperine will have on any chosen dietary substance or drugs. However, some categories of substances have been directly tested and found to have enhanced bioavailability when consumed with piperine.

Studies are going on larger list to be compiled of substances including drugs and dietary substances, whose bio availabilities are assumed to be altered by piperine due to the known effects of piperine on proteins which metabolize and or transport these substances.

Various studies suggests and as we discussed above, the cells in some tissues have ‘pump’ proteins which expels substances from cells. One of such protein is p-glycoprotein (Pgp) that is active in the intestines, and it prevents substances from being absorbed into the blood. Pgp is active against many drugs and among them, most or all of the HIV protease inhibitors currently in use. Pgp activity in the intestine decreases the bioavailability of the protease inhibitors, and Pgp activity in other tissues lowers the effectiveness of the drug molecules which can manage to enter the body since it decreases the stay time of the drugs in the cells where they are needed.

Logically its concluded that the effectiveness of HIV protease inhibitors will be increased if they were used in combination with inhibitors of Pgp. Infact, this concept is supported by various experiments with different Pgp inhibitors. Indeed, Pgp inhibition has been shown to reduce HIV viral replications. Though Piperine itself has not been studied, but there is no reason to beleive that it would not behave similarly.

Certain other HIV drugs can cause an increase in the body’s production of P-glycoproteins, though they are not the carriers of Pgp. Classical example is Nevirapine, which induces the production of Pgp which in turn interferes with the mechanism of action of various drugs, such as the protease inhibitors. Here again, a Pgp inhibitor seems to be the main cause.

The recommended dosage of piperine is 5-15 mg/day. It is absorbed very fast and completely from the digestive tracts. Effects on absorption of other supplements or drugs begin around 15 minutes after dosing and last for one to two hours. Blood levels peak about 1-2 hours after dosing but effects on metabolic enzymes can last for much longer duration, from one to few hours, depending upon the type of enzymes.

Piperine dosage should be therefore coordinated with the dosage of the substances in question whose bioavailability we want to increase, since too long intervals between the piperine dose and dose of another substance can result in the piperine effects getting disappeared during the interim. Since these effects depend on which enzymes may be responsible for metabolizing the substances, one may not know which enzymes these are and or how long they can be affected by piperine usage. The most trusted method for ensuring piperine’s effectiveness is to take piperine dose about half an hour before taking the substance whose bioavailability we want to increase.